Why Is Portland So Liberal?

When you move or even vacation in another city, you find yourself wanting to learn about the area. At least I do. I find the history of the places I visit enlightening, interesting, and sometimes sobering. Such is the case with Portland in particular, and Oregon in general. Over these 7+ years of visiting, I’ve wondered what it is that makes Portland arguably the example of hyper-liberalism in America.

Before my daughter moved here, I knew very little about Oregon. In fact, I had no concept of the sheer expansiveness of the American West in general until we made a cross-country drive. When I thought of Oregon, I vaguely recalled a chapter in American History about the Oregon Trail, and I thought of  Portland, not only because it is the largest and most well-known city in the state, but now because I have family and friends here.

Apart from the wildfires and the eclectic city of Portland, Oregon is well-known for its beauty, but not for its ugly history. I began to learn more about that history after the murder of George Floyd, as protests that occurred in cities all over the country began to focus on Portland. At first, it seemed the protests weren’t any worse here than in any other large city in the country, but as the media focus intensified, and because I had a daughter and grandkids living here I began to research what was unique about Portland’s protests. After learning a bit about the state’s history, things have become more clear as to why this city became a hotbed.

After the Civil War, the authors of Oregon’s constitution wrote laws that said no black people could live or hold real estate in the state. The legislature went even further with a black exclusion law stating that any black person who broke the law by entering or passing through the state should be punished with a public lashing. As Portland was founded and eventually grew to be the most populated city, segregation laws flourished. Specific neighborhoods were specified as black or white. More laws were passed to limit loans that could be given to black families, and banks would not guarantee the loans of property near these neighborhoods, a practice known as redlining. If you’ve ever had trouble understanding the term “systemic racism”, learning how laws were written specifically to prevent the growth of income, education, and decent housing of black people, and policing those who broke these exclusionary laws is crucial. In Oregon and many other states, laws were written specifically to prevent black families from growing their income and generational wealth through things like homeownership, education, and safe affordable housing. These privileges were afforded to white families living in Oregon and across the country.  Laws limiting the rights of Japanese Americans and Native Americans – basically any people of color-  were later added, to ensure that Oregon would be what many historians say were the founders’ goal:  “a white utopia.“

Not surprisingly, the laws were effective, and even though most have been abolished (some verbiage remained on the books recently as 2002) Oregon remains one of the whiteness states in the country and a bastion for white supremacy groups who would love to keep it that way. When Donald Trump ordered the National Guard to crack down on Portland and threatened to do the same in other “liberal” cities, he knew what he was doing. He was calling for the Proud Boys, KKK, and many other neo-Nazi Groups residing just outside the city to come on in and stomp not only Antifa but also other peaceful protests happening nightly in the city. While I’m not a proponent of violence on either side, the irony of conservatives railing against Antifa seems counterintuitive. Antifa was founded to fight a growing movement of Fascism. And while we may not like their tactics, at its core it is a movement that wants an end to a philosophy that the greatest generation fought against in WWII led by Hitler and his Nazis. So to see these white supremacist hate groups in their KKK robes carrying swastika flags marching into Portland, and only showing anger at Antifa doesn’t make sense to me. 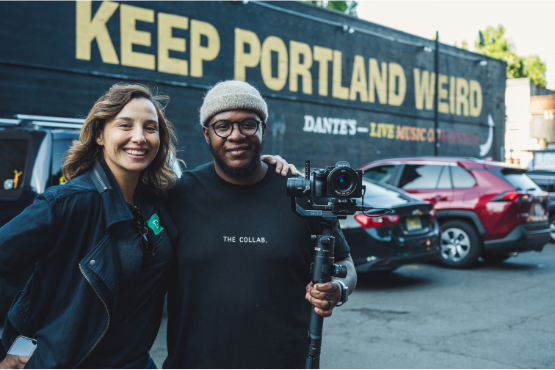 I’ve concluded that somewhere inside Portland’s loud, proud, crunchy, hippy, eclectic, open-minded of all lifestyles attitude, the city, and its people are making every effort to over-correct for its awful history. And while it is still one of the whitest cities in one of the whitest states in the U.S, Portland’s continuing evolution is what I appreciate most about it.