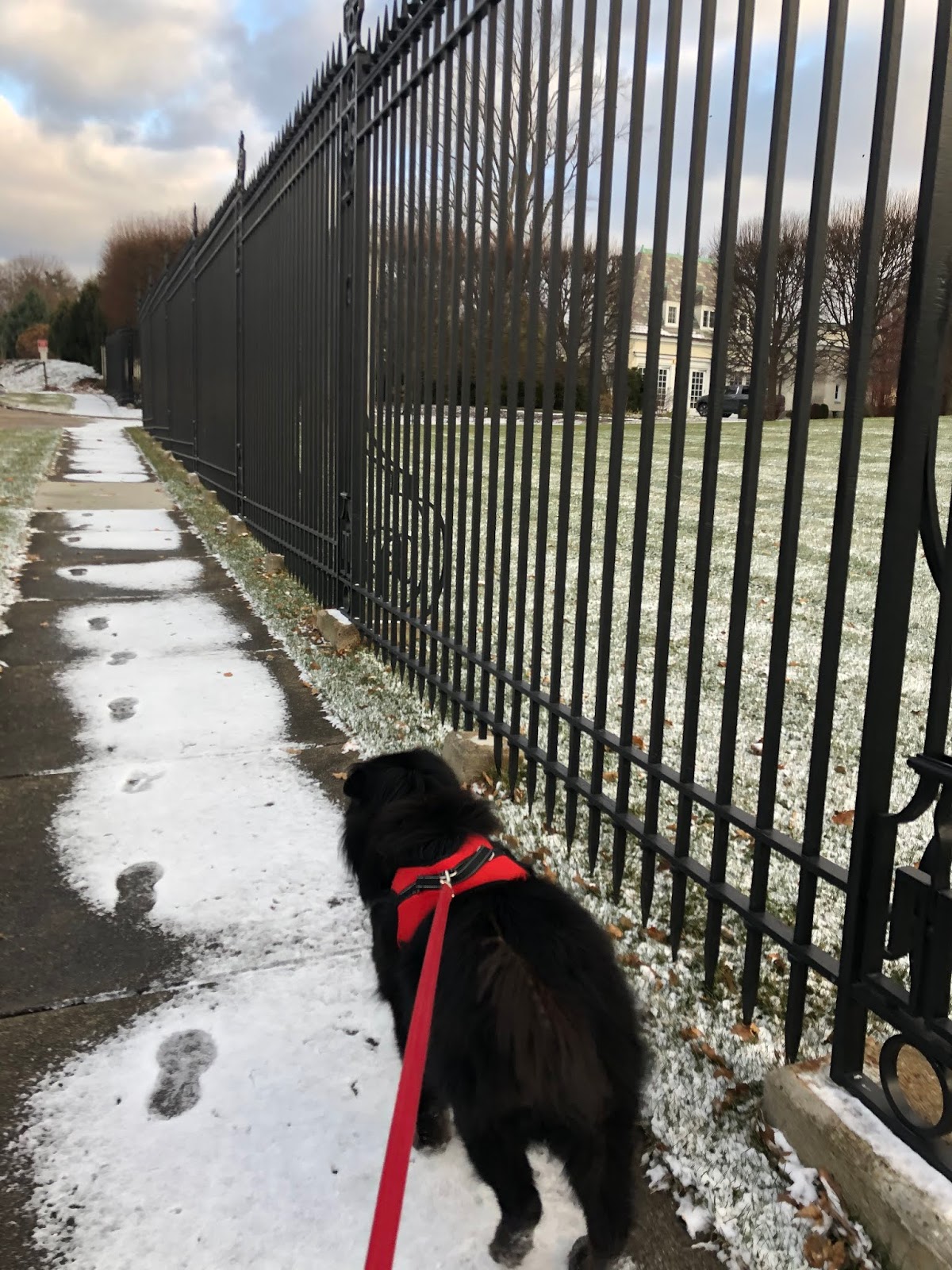 My husband and I downsized to a condo this past fall, and one of the biggest adjustments has been the routine of walking our dog. Our previous home had a fenced-in yard, so all we had to do was to open the door. Our new living arrangement has us walking Scooby at least 4 times daily, which is good for him–and for us. Beyond the exercise, though, is the sense of history and nostalgia that overcomes me on my neighborhood walks. My current residence, a quaint condominium complex, sits on the grounds where an exquisite mansion called Harbel manor once stood.

Harbel Manor was the elaborate estate of rubber baron Harvey S. Firestone. While not as large or architecturally significant as Stan Hywet, the estate of his Goodyear counterpart, Frank Seiberling, it was still a marvel set on 60 plus acres in West Akron. It is unimaginable that this house, like so many of its era, was sold to developers and torn down, but I understand that it was a common occurrence at the time. These huge mansions were seen as money-pits, and easier to tear down before many had the vision to re-purpose them into offices or apartments. How cool would it be to be living in a condo that was a converted wing of one of these incredible homes? It is doubtful that Akron could have supported two historical mansions – Stan Hywet and Harbel Manor, but I’m guessing the tearing down of homes like these nationwide led to the founding of many historical societies here and elsewhere.

I grew up in this neighborhood, so to be living in it again at this point in my life is cool. My house was just off Merriman Road, a street known for its stately mansions. Although our home was lovely, it was modest compared to the nearby estates that were the heart of this neighborhood. Most of the homes on Merriman and surrounding streets were built between 1911 and 1930 by the rubber barons of Akron; the founders and executives of Goodyear and Firestone and the many other companies that flourished and made Akron the “Rubber Capital of the World.” Back then, the smaller homes were around 5,000 square feet, while the largest, Stan Hywet, built by Goodyear’s founder Frank Seiberling, was 21,000.

When I was young I’d ride my bike uke up and down Merriman Road and marvel at the incredible size of these magnificent estates. I was especially enamored by the home of Paul Litchfield, the first CEO of Goodyear who was famous for many things, but most notably his overseeing the building of the first Goodyear blimp. His mansion was named The Anchorage (seems like all the estates had names back then) and sat on the corner of Merriman and Mayfair behind a tall black iron gate to which an anchor was attached with a chain. (I need to google the significance of the anchor) Litchfield and Seiberling were good friends and the Anchorage was nicknamed Little Stan Hywet, and he entertained quite a bit there. He hosted millionaires, politicians, scholars and even Amelia Earhart. who was in Akron buying tires for her plane before her infamous flight around the world.

That house provokes a strong childhood memory. One day I came home from a bike ride and my probably 7-year-old self told my dad I wanted to marry a prince and live in one of those castles, specifically The Anchorage, someday. My dad, who started Wilson Plumbing and Heating in Akron (now in its 3rd generation) was a practical man, but he humored me as I chattered on. I knew he knew a lot about these big mansions because they all had boilers, and he was a boiler expert and had been inside so many of these homes doing work- so I asked him a lot of questions. “Who lived in these mansions?  Were they big families like ours? I never seem to see any kids around.  But they give full-size candy bars out at Halloween, and the people answering the doors all look like grandmas.” He said many of those homes only had a few people living in them. “Why do they need all that room?” I asked. I suggested we switch houses with those people, they could live in our smaller house with 2 or 3 people, and our big family of 7 could live in one of the big homes. He smiled and gently explained that if you live in a big house like that, you have a lot of rooms to heat, and that would cost a lot of money. I didn’t quite get it then that people with lots of kids had far less money than people with fewer or no kids and the irony that the people who needed the big houses couldn’t afford them because they had all these kids! Ha!

As I walk my dog every day, I happen across another mansion right across the street. It was once the home of Harvey S Firestone, Jr, and I imagine when it was built, it was just across the field from his parents’ place. This home, thankfully, was not torn down, and it still sits in all its glory, a reminder of the grandeur and history of this era of Akron. It is currently listed for sale with Sotheby’s, and from the photos, it looks as though the owners have retained its historic majesty. It’s a mere 5 million, and if someone decides to turn it into apartments, I’d love to be a tenant. In the meantime, I’ll keep walking the dog.